Round up of the latest fishing news

EU: sharks now need protection from overfishing from The Times

It could spell the end of rock salmon or huss being sold at the chip shop. The European Commission, presenting its first plan to limit all types of shark fishing, has said that it had to act to stop several types of shark being pushed towards extinction. Read more . . .

Google Ocean, which will be included in the newest version of Google Earth, will allow users to swim around underwater volcanoes, watch videos about exotic marine life, read about nearby shipwrecks, contribute photos and watch unseen footage of historic ocean expeditions - all from the comfort of their homes. Read more . . .

What’s bad for fish is bad for people

I am a sea angler.  I am in this film – fishing for bass on the Blackwater estuary in Essex  – and took part in it because I share the view that modern fishing technology in the hands of a few people is destroying the value of the sea for millions of citizens. 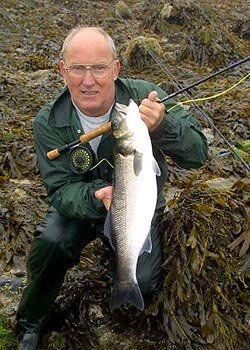 Bob Cox with a bass he caught

That is how it is in Europe, anyway.

In the USA, recreational sea angling is recognised as a legitimate use of many species of fin fish. There, fish that are of great importance to sport fishermen are managed so that anglers get the major share of the allowable harvest.

On the East Coast for example 90 per cent of the striped bass are allocated to recreational fishermen; commercial fishermen get what’s left.

Here in Europe our bass, now re-branded by smart restaurants as “sea bass”, were until the last 30 years almost exclusively “the angler’s fish,” held in the highest esteem by all who fished for them with rod and line.

Bass rods, bass lures and bass boats were all produced in pursuit of the bass.

Then came climate change, here in N W Europe it kicked in round about 1989 when warmer spring and winter seas allowed millions of bass fry to survive and throughout the 1990s bass production trebled.

This should have been good news for sea anglers but by then the commercial fleet aided and abetted by Government and the EU’s Common Fisheries Policy had already reduced the most important commercially fished species, such as cod, haddock and plaice to a tiny fraction of their original abundance.

With nothing much left to fish for, they turned their massive, efficient catching machines on bass. END_OF_DOCUMENT_TOKEN_TO_BE_REPLACED