TEOTL screens at the UN and rapid developments on bluefin

From the Seafood Summit in Paris last week, where we were all agog for news of a shift in the French position on bluefin which only happened after we left, I flew to New York for a screening of The End of the Line at the UN General Assembly, organised by the Deep Sea Conservation Coalition. This screening was arranged to co-incide with a UN working group reviewing the effectiveness of UN resolution 61/105 passed four years ago that called on states and regional fisheries managers to protect vulnerable marine ecosystems such as sea mounts from deep-sea trawling.

The screening of a 25-minute version of the film was well attended, with some 80 or so diplomats and experts filling the delegates dining room for the screening, Q&A and reception hosted by DSCC. As you can imagine, there were some searching questions, for instance “What can the UN do about over-fishing?” and “What is the attitude to sustainability in Japan?” I attempted an answer and about 50 people departed with a copy of the book on which the film is based.

The audience was greatly fascinated by the announcement, at last, by two French ministers that day, of the French position on bluefin tuna – support for an Appendix 1 listing, a full international trade ban, but with an 18-month delay.

It seemed timely for us, the film-makers, Oceana and Greenpeace to put out a release relevant to the United States, so we pointed out, what few US consumers seem to know, which is that imports of endangered bluefin tuna into the United States for the sushi trade are contributing to the collapse of the population in the Mediterranean and Eastern Atlantic. The bluefin that finds its way on to the menus of the New York and LA restaurants that have such poor ratings for sustainability on www.fish2fork.com is more likely to have come from the Med than the US. Official export figures from the European Union, compiled by Roberto Mielgo, one of the major players in our film, show that up to 3,341 tons of bluefin was exported from the EU to the United States between 1998 and June last year. In 2008 the US was a net importer of bluefin, importing 360 metric tons from around the world, notably the Mediterranean, compared with the 266 metric tons that were caught domestically. Such is the value of bluefin - nearly $9 a pound on average - that the total trade in the United States is worth nearly $100 million a year.

I returned to England to hear that frenzied briefings were going on in Strasbourg ahead of a crucial vote in the European Parliament on whether the EU should support Cites Appendix 1 for the bluefin. MEPs came under heavy lobbying pressure from DG Fish which told them that an Appendix 1 listing was an incredibly dangerous precedent to set and might one day be applied to the cod. What disgraceful nonsense. MEPs also had their ears ringing with briefings from the European fisheries inspectorate saying they had the fishery screwed down and could police an 8,000 tons a year sustainable quota imposed under Cites Appendix II, which regulates but does not stop trade. There was a rocky moment for our campaign to save the bluefin when it looked as though this advice would prevail. Then, MEPs realized that the EU was not the only player in the bluefin game and that Turkey, Libya, Croatia, Algeria and the Japanese long-liners in the Atlantic were quite capable of wiping out the bluefin on their own if the Japanese market was not closed. Wise counsel prevailed and a majority of MEPs voted to place the bluefin on Cites Appendix 1, without the 18-month delay called for by France. This will make it difficult for DG Fish, or the Commission, to resist pressure to do the same. The same day as the vote, Italy finally declared for Appendix 1, making it inessential that the conditions imposed by France should apply. The fishing lobby was furious. It is looking more and more as though the EU’s 27 member states might actually go to Doha supporting Appendix 1 for the bluefin. Fingers crossed!

The End of the Line Launched in Spanish

The Spanish version of The End of the Line, the first major feature documentary film revealing the impact of overfishing on our oceans, was launched by MarViva Foundation, Oceana Europe and renowned singer Miguel Bose in Madrid on 3rd February. 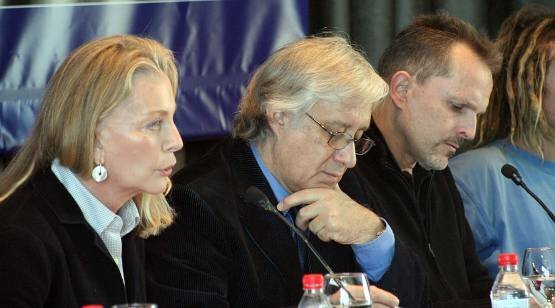 The film examines the imminent extinction of bluefin tuna, brought on by increasing western demand for sushi; the impact on marine life resulting in huge overpopulation of jellyfish; and the profound implications of a future world with no fish.

Bose is the narrator in the Spanish version of the documentary, directed by Rupert Murray and based on investigative journalist Charles Clover’s book of the same name.

During the presentation, MarViva and Oceana released a statement signed by a group of environmental organisations and international figures urging Spain to support the ban on the international trade of bluefin tuna (Thunnus thynnus) at the next Conference of the Parties of the Convention on International Trade in Endangered Species of Wild Fauna and Flora (CITES) that will be held in Doha (Qatar) in March.

Representatives of Greenpeace, Ecologistas en Acción, Pew Foundation and the government of the Balearic Islands, and Roberto Mielgo (the former tuna farmer turned whistleblower who is a protagonist of the film) were present to support the statement.

They highlighted the critical situation that the species is undergoing in the North Atlantic and the need for immediate action to ensure its future. Decades of overfishing, illegal fishing and management dominated by industry interests, have decimated the bluefin tuna spawning stock to levels below 15 per cent of the existing population before industrial fishing.

Negotiations are currently taking place in the heart of the EU for a common stance for the CITES meeting, which will be a determining factor for this species’ future. The European Parliament’s Environment Committee, in a resolution within the process framework, has already urged Member States to support Monaco’s proposal for a ban on international trade.

The signatories consider that Spain has the responsibility of acting to preserve bluefin tuna, and they urge the Spanish government to immediately adopt and promote the following measures:

Bluefin tuna is disappearing. The decades of management by the Contracting Parties to the International Commission for the Conservation of Atlantic Tunas (ICCAT), which include the EU, have been called an “international disgrace” [Report of the Independent Performance Review of ICCAT,  2008].

The parties have shown themselves to be incapable of adopting the necessary measures such as quotas in accordance with scientists’ advice or the closure of the fishery during the spawning period. CITES is currently the sole valid alternative to guarantee the future of this species.

On the other hand, the socio-economic considerations do not make sense in this context. The EU Member States must guarantee the fishing industry’s long-term viability. The administration’s current position only constitutes a guarantee that bluefin tuna fishing will cease to exist in the near future.

Spain, which currently holds the EU presidency and has the highest quota percentage among Member States, therefore has the responsibility of supporting this measure.

The protection of bluefin tuna spawning areas in the Mediterranean through the creation of marine reserves is a necessary step to protect this species, starting with the area located to the south of the Balearic Islands where there is already sufficient scientific information that upholds the immediate need for protection.

A worldwide ban on the trade in the endangered bluefin tuna has moved a step closer after France pledged its support.

Bluefin tuna for sale at a fish market in Japan

In a significant move the French said they would support the listing of bluefin tuna under appendix 1 of the Convention on International Trade in Endangered Species (CITES) but with conditions.

French environment minister Jean-Louis Borloo and fisheries minister Bruno Le Maire said they want an 18-month delay before the measures come into force. In return for its support France is also likely to seek an exclusive fishing zone for line-caught tuna as well as financial aid to retrain fishermen who are likely to be laid off.

This will be seen as a sop to the powerful French fishing lobby which has threatened blockades if the ban is imposed. The fishermen’s leaders are also seeking an urgent meeting with French President Nicolas Sarkozy. END_OF_DOCUMENT_TOKEN_TO_BE_REPLACED

Published
by
Willie MacKenzie
in Blogs and Greenpeace Blog
. 0 Comments

At last, France has officially announced support for an international trade ban on Atlantic bluefin. This is great news.

It means that 23 out of the 27 EU countries now support the species being protected by CITES (the organisation which regulates trade in endangered species). It also means there is no longer any effective block to stop the EU reaching a common position (at a previous vote, it had been blocked by the Mediterranean countries).

Two of the main fishing nations, Italy and France are supporting the trade ban, and Italy has already declared it is suspending its own fishery. That is pretty momentous. It’s as if the proverbial turkeys have just voted for Christmas by a landslide.

Wind back just a year, and this might all seem unthinkable. Yet President Sarkozy stood up on a podium last July and announced France was going to protect bluefin. The position in France has not exactly been as clear as consommé in the intervening months, and the political position seems to have flip-flopped more than a floundering fish on a foredeck. END_OF_DOCUMENT_TOKEN_TO_BE_REPLACED