Bring it on, Seafish!

The End of the Line is six weeks away from its nationwide popular premiere (you can pre-book on line through this site – just go to the Screenings page) but already the fishing industry is starting its campaign against us.

Bring it on, we say.

When the film premiered at the Sundance Film Festival, Seafish, the taxpayer-subsidised industry lobby group, sent their communications manager James Wood to the Festival to see the film and to report back.

This was an undercover operation in the sense that Wood did not identify himself to any of us at Sundance - even though he knew some of those present. END_OF_DOCUMENT_TOKEN_TO_BE_REPLACED

Ted Danson to narrate The End of the Line

Last week’s big development on the film was recording the narration for The End of the Line with the American actor Ted Danson, best known for his leading role in Cheers and his frequent appearances on the cult series Curb Your Enthusiasm.

He recently reinvented himself with his layered portrayal of a complex Enron-era fraudster in the legal thriller, Damages.

Ted has a long and distinguished record campaigning for the oceans and he told us that when he saw the film, he was thrilled: he felt that it told the complete story of over-fishing in a dramatic and accessible way.

He very generously took a day out of his demanding filming schedule for a new HBO series to come to a recording studio in New York’s Greenwich Village to record the narration.

He also gave us a filmed interview, which we will be using to promote the film and the issues it raises - and which we will put on the website. We are now outting his voice over on the film, ready for the release on June 8th.

Nice reforms Mr Borg, but aren’t you missing something?

Earlier this month, I went to Brussels for a private screening of our film, The End of the Line, and debated the sad state of Europe’s fisheries with Joe Borg, the Commissioner for Maritime Affairs and Fisheries. 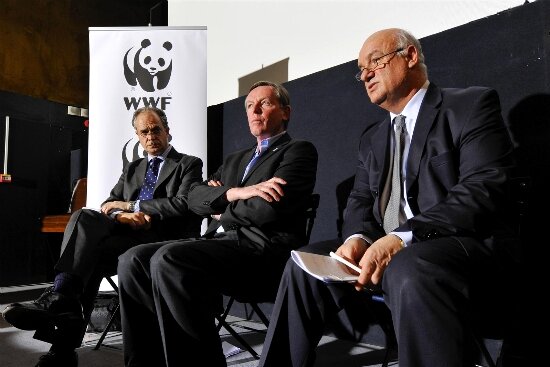 Charles Clover, Tony Long of WWF and Joe Borg, Commissioner for Maritime Affairs and Fisheries, debate Europe’s fisheries policy after a WWF screening of The End of the Line

The screening had been organised by WWF for members of the European Commission and country representatives ahead of the publication of the Green Paper on the reform of Europe’s fisheries policy last week.

I was surprised and impressed by two things. First, the openness and dedication with which Commissioner Borg trotted along and watched an 82-minute film and debated its conclusions, especially since these are even more damning about Europe’s management of its fish stocks than the Commission’s own Green Paper – which admits that 90 per cent of Europe’s fish stocks are overfished.

END_OF_DOCUMENT_TOKEN_TO_BE_REPLACED

Europe’s fishing policy has failed and nearly nine tenths of its fish stocks are overfished, the European Commission has admitted.

The Commission published a Green Paper proposing radical reforms of the Common Fisheries Policy (CFP) and began an open debate on the proposed measures which will last until the end of this year.

Among the proposals are:

END_OF_DOCUMENT_TOKEN_TO_BE_REPLACED

Waitrose supports The End of the Line

The UK cinema release of the film is being supported by retailer Waitrose, which has a long term commitment to responsible fish sourcing.

The retailer launched its Responsible Fishing Policy 12 years ago, which includes a complete ban on any threatened species and on damaging fishing methods such as beam trawling.

All its fish are from sustainable wild sources or, if farmed fish,  from responsible farming systems.  Mark Price, Waitrose managing director, said:

To support the launch of such an important film was an absolute must for Waitrose.  With many species on the brink of extinction there has never been a more pressing need to bring this issue to the fore. The End of the Line shows that we can all enjoy fish, but encourages viewers to think more carefully about where their fish is coming from.”

To find out more about Waitrose’s policies go to: www.waitrose.com/food/productranges/fish.aspx

With concern over bluefin tuna stocks growing among environmental groups, we round up the latest news at the start of the Mediterranean bluefin tuna fishing season. 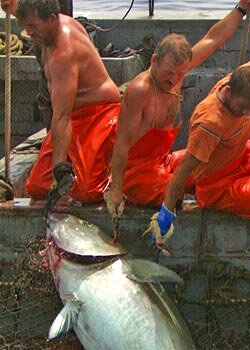 A large tuna is caught by fishermen

Reuters report that a new WWF report says overfishing is set to wipe out bluefin tuna in three years.

The news agency says: “Overfishing will wipe out the breeding population of Atlantic bluefin tuna, one of the ocean’s largest and fastest predators, in three years unless catches are dramatically reduced, conservation group WWF said.

“As European fishing fleets prepare to begin the two-month Mediterranean fishing season, WWF said its analysis showed the bluefin tuna that spawn - those aged four years and older - will have disappeared by 2012 at current rates.”

Sergi Tudela, head of fisheries at WWF Mediterranean, said: “For years people have been asking when the collapse of this fishery will happen, and now we have the answer.” END_OF_DOCUMENT_TOKEN_TO_BE_REPLACED

One of the world’s rarest sharks has been eaten after being accidentally caught in fishing nets in south-east Asia.

Only 40 other sightings of the shark have ever been recorded, according to the World Wildlife Fund.

The 500kg, four metre megamouth shark died while struggling in the fishermen’s net on 30 March off Burias island in the central Philippines. Read more at Guardian Environment.

Supermarket giant Sainsbury’s has re-named a type of fish Colin because customers are too embarrassed to ask for pollack.

The chain is promoting the seafood in the run up to Easter, as it tastes similar to cod and is more sustainable.

But instead of the English name, it will be called Colin - the French word for hake, another member of the cod family. Read more at Telegraph Earth

The humble sea cucumber is under increasing threat worldwide, a new report warns.

Increasing demand for the cucumber – once a cheap and staple food of the poor, but now fashionable in expensive restaurants – is piling pressure on already depleted stocks. 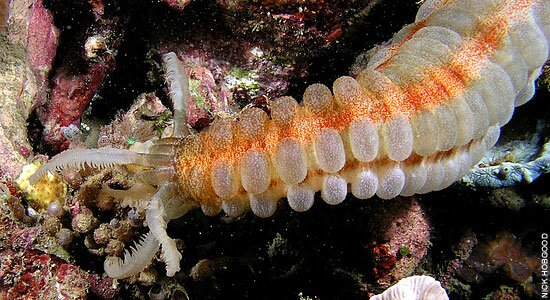 Sea cucumber feeding at night off the Indonesian coast

The UN’s Food and Agriculture Organisation (FAO) warns in its report that sea cucumber populations across the globe, from Asia to the Galapagos, are in trouble and most high value commercial species are already depleted.

In a majority of countries looked at by the FAO and in the African and Indian Ocean regions, stocks are overfished. Similarly, in the Asian Pacific region the most sought-after species are largely depleted. END_OF_DOCUMENT_TOKEN_TO_BE_REPLACED