Ministers listen to The End of the Line

As I dashed through the snow from the chaos around the COP15 climate conference to a screening of The End of the Line near the Town Hall in this lovely city, the phone went and I learned that European Ministers have done the right thing, arguably for the first time, in the annual talks over fish quotas, a story that might make headlines if it was not overshadowed by the climate talks.

They approved quotas based on scientific advice on North Sea cod, plaice and sole without discussion - instead of setting them at significantly more than scientists recommended as so often in recent years.

What has come over them? Well partly it may have to do with an unprecedented spat with Norway over quotas, which will mean that these cannot be finalised until the New Year.

But I am also told that advisers have woken up to the fact that none of the major processers and retailers such as Birds Eye and Youngs are buying the North Sea cod because it is not being harvested sustainably.

Progressive ministers in Denmark, Germany and the UK have realised that the industry faces an uncertain future, and lower prices, unless it can sell its product across the whole market and this is behind the decision to bite the bullet, follow the scientific advice and manage the fishery properly. This is not before time, but to be applauded.

Could this have had anything to do with the fact that The End of the Line has been screened recently in all those countries?

Well, probably not directly, but indirectly the message that we in Europe can’t go on managing our seas like this seems to be getting through.

I write this while looking out over the sea at Cape Cod realising that it is here along this coast that we humans have done the most damage to fish stocks. 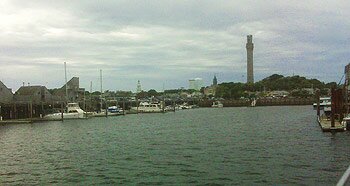 Cod is the history of this coast and its people. It is utterly beautiful here in Provincetown where The End of the Line is being screened as part of the their film festival.

Despite wind and rain - yes, like the UK - this is a community that was founded on fishing bounty. It now lives on tourism.

My co-speaker at the Q&A was Owen Nicols, a young man who was born and bred here in Provincetown. He is studying for a PHD in Fisheries Science and works at the local Oceans Institute.

END_OF_DOCUMENT_TOKEN_TO_BE_REPLACED

Bring it on, Seafish!

The End of the Line is six weeks away from its nationwide popular premiere (you can pre-book on line through this site – just go to the Screenings page) but already the fishing industry is starting its campaign against us.

Bring it on, we say.

When the film premiered at the Sundance Film Festival, Seafish, the taxpayer-subsidised industry lobby group, sent their communications manager James Wood to the Festival to see the film and to report back.

This was an undercover operation in the sense that Wood did not identify himself to any of us at Sundance - even though he knew some of those present. END_OF_DOCUMENT_TOKEN_TO_BE_REPLACED

Ted Danson to narrate The End of the Line

Last week’s big development on the film was recording the narration for The End of the Line with the American actor Ted Danson, best known for his leading role in Cheers and his frequent appearances on the cult series Curb Your Enthusiasm.

He recently reinvented himself with his layered portrayal of a complex Enron-era fraudster in the legal thriller, Damages.

Ted has a long and distinguished record campaigning for the oceans and he told us that when he saw the film, he was thrilled: he felt that it told the complete story of over-fishing in a dramatic and accessible way.

He very generously took a day out of his demanding filming schedule for a new HBO series to come to a recording studio in New York’s Greenwich Village to record the narration.

He also gave us a filmed interview, which we will be using to promote the film and the issues it raises - and which we will put on the website. We are now outting his voice over on the film, ready for the release on June 8th.

We need posters, leaflets, business cards, DVD’s of the film, hats, badges, jackets all with our distinctive logo. Jenny our researcher and assistant has been working full time on the logistics of getting the entire team out to this frozen bit of Utah.

The press kits are ready,  we have a house to stay in courtesy of the forward thinking of George the other producer, we have our flights booked but the most pressing thing is to try and get our website which is under construction, up and running by Thursday Jan 15. Conference calls, moving offices (again). END_OF_DOCUMENT_TOKEN_TO_BE_REPLACED

We finished the film with a gnat’s breath between us and oblivion and it winged its way to Utah at the end of last week. Now the realisation that we have to spend nearly two weeks sharing a house - we being myself, the other producer, George, Charles, Rupert and Christo (one of our executive producers).

I think it’s fair to say we are all strong- minded, opinionated, bolshie extroverts with shared passions - saving the oceans and good wine. How this will unfold over the course of the festival who knows.  Read this blog. END_OF_DOCUMENT_TOKEN_TO_BE_REPLACED